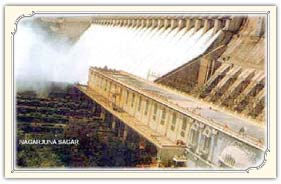 Nagarjuna Sagar Dam, the world's largest masonry dam is constructed across river Krishna in the Nalgonda district of Andhra Pradesh. With a capacity of 11, 472 million cubic meters and a wall of 6 ft. thickness, it is the largest man-made lake in the world. The dam which is just 165 kms from Hyderabad is a prominent tourist spot for those who visit Hyderabad. The dam is 490 ft. tall and 16 kms long and has 26 gates that have a width of 42 ft. and length of 45 ft. each. What makes this dam worth visiting is not only its irresistible beauty and grand structure but also its significance as a rich water source. Renowned as one of the earliest irrigation and hydro electric projects in India, the dam acts as a rich source of irrigation to Nalgonda, Prakasam, Khammam and Guntur districts. The origin of this dam can be dated back to 1903 when it was constructed by the British to make use of the excess waters of River Krishna. Read further to know more about the dam and its highlights.

History
Nagarjuna Sagar Dam was the result of a proposal made by the British officers to construct a dam using the excess waters in the river Krishna. The dam was constructed on the border of Guntur and Nalgonda districts and the water in the dam was released by Indira Gandhi in 1967. The dam is named after the Buddhist monk, 'Acharya Nagarjuna'. However, the dam's construction led to the submerging of an ancient Buddhist settlement place, Nagarjunakonda, which was the capital of Ikshvaku dynasty in 1st and 2nd centuries. As result, the monuments which were part of the place were dug up and relocated to Nagarjuna Hill, an Island which lies in the center of the dam and to the mainland. It is the rich source of irrigation water to four districts namely Nalgonda, Guntur, Khammam and Prakasam with the total area covering more than 10 Lakh acres. It is said that these waters which rushed into the land made Andhra Pradesh earn its name, the 'Rice Bowl of India'.

Other Attractions
The Nagarjuna Sagar reservoir lies adjacent to the dam, which adds to the beauty of the dam. Apart from the dam, there are adjacent attractions such as Nagarjunakonda Island which lies in the centre of the lake. It has the remnants of Buddhist settlement which was relocated there as a result of the construction of the dam. There are launches which take you to this place and it requires a 40 minutes boat travel to reach the Island. The visitors can also visit Ethipothala waterfalls which provide a cascading effect and Srisailam Wildlife Reserve that lay in the vicinity of the dam.

It is not surprising if one feel oneself insignificant while standing before such a huge structure. Hope this article familiarises you with this architectural wonder.