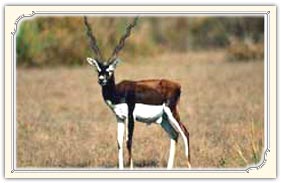 Mahavir Harina Vanasthali National Park is one of the most prominent deer national parks located in Vansthalipuram, which is 15 kms from Hyderabad city. The park which was established in 1975 was named after Mahavir, the Jain Saint, to honour him on his 2500th birth anniversary. The present location of the park was once a private hunting ground of the Nizams, the rulers of Hyderabad. As a result, the decision was taken to maintain this precious location and rehabilitate the wildlife. The habitats of this park include Black Bucks, short-toed eagles, Indian pond herons, porcupines, water monitors, kingfishers, cormorants and several other bird species. Located in the outskirts of Hyderabad towards Vijayawada, the park is easily accessible from the city. Under the maintenance of the Forest Department, visitors can opt for a shuttle service or a guided tour in the park. The park which extends to over 189 hectares also looks picturesque with its acacia trees, grasslands and white and golden flowers.

The Mahavir Harina Vanasthali National Park is known for being the home of Black Buck deer, of which there are about 400 of them. The deer which is also known by the name, 'Jinka' in Telegu is the state animal of Andhra Pradesh. This deer was one of the most hunted animals during the 18th, 19th and the first half of the 20th century. The declaration of the place as a national park, in a way, saved the deer from complete extinction.

Other Inmates
It's not only the deer that have made the national park its home, but over 500 cheetahs, wild boar, monitor lizards, mongooses, porcupines and snakes, which also form a part of this park extending to over 14.59 sq. km area. For a curious bird watcher, there are also rare species of birds including quails, pond herons, cormorants, egrets, partridges, peacocks, doves, kingfishers, cormorants and birds of prey like kites and vultures. You can also see a large variety of eighty species of migratory birds here. A rare variety of bird species, short-toed eagle, can be found in this area. Besides these rare species of animals, the park is also home to a number of trees like Acacias, Neem, Bauhinias and Buteas that add to the beauty of this park.

Park Safari
Tourists visiting the park have a lot of options like viewing the animals through sheds or watch towers. There are also vans which take the visitors on safari rides for a closer look at the different animals. The park also has an exhibition hall where you can learn more about wildlife conservation and an audio-visual on wildlife along with an informative library. The park, which is under the maintenance of the Forest Department, is open on all days except Mondays from morning 9.00 AM to 5.00 PM.

Mahavir Harina Vanasthali National Park is one of the few deer national parks in the country. Hope this article familiarises you with the surprises this park has in store for you and your family.