To know more about the different places of worship in Hyderabad, scroll further. You cannot miss out on the beautiful architecture of these sacred places while you are here.
Hyderabad: Places Of Worship in Hyderabad

Places Of Worship in Hyderabad 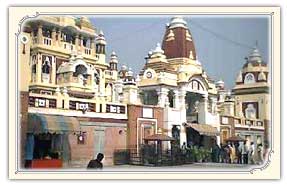 Hyderabad exhibits a unique amalgamation of two distinct cultures and religion-Hinduism and Islam. This fusion is depicted through the architecture of the places of worship in this beautiful yet historical city. These places also serve as architectural wonders having withstood the tests of time. These unique elements bind together the peaceful co-existence of the two religions and cultures and encourage the future generation to carry on its legacy. The splendid architecture of the mosques and the temples are truly amazing and these should not be missed when you visit the beautiful city of Hyderabad. Come and explore what these beautiful places of worship have in store for you.

Birla Mandir features a unique blend of southern and northern styles of architecture and is an enchanting temple, dedicated to Lord Venkateshwara. Also, from this temple, the panoramic sight of the cities of Hyderabad and Secunderabad are also visible. Considered to be the oldest and the largest mosque in Hyderabad is the Mecca Masjid. It took seventy seven years to give it its final touches and for what it is today. Also, the city is known as the home to the oldest Roman Catholic Church, which was earlier, the Cathedral of the Archdiocese of Hyderabad. The geometric patterns of the Paigah Tombs are unique to the traditional 'Nizami' culture. In order to get an idea about the ancient culture and customs, a visit to the Qutub Shahi Tombs will leave you spellbound. While you are in Hyderabad, you simply cannot miss visiting these places of worship! Hence, plan accordingly and take back wonderful memories that will stay with you for a lifetime!

Birla Mandir Hyderabad
The 'Birla Mandir' is one of Hyderabad's most prized temple structures ever to be built. Located in 'Kala Pahad', Hyderabad, this temple was established in 1976. The Birla Mandir dedicated to 'Lord Venkateshwara', is one of the many temples constructed by the Birla Foundation.

Chote Hazrat Ki Dargah Hyderabad
One of the most venerated monuments located in 'Devan Devadi', Hyderabad; the 'Chote Hazrat Ki Dargah' is a prime pilgrimage centre for the Muslims. Built during the ancient times, this important religious structure is built in the memory of 'Hazrat Ali', who was the son-in-law of 'Prophet Mohammad'. Muslims come here to offer their prayers to 'Prophet Mohammed'.

Mecca Masjid Hyderabad
Mecca Masjid is the biggest and the most spectacular mosque of Hyderabad. It is also one of the largest mosques in India and is listed as a heritage building. It is believed that a strand of Prophet Mohammed's hair is preserved in a room in the mosque's courtyard. The bricks used for the construction of the mosque were brought all the way from the holy city of Mecca, Saudi Arabia.