Hyderabad was appropriately titled the high-tech city of India. With a thriving IT industry, the city is best known for its software and pharmaceutical services. Scroll down for more.
Hyderabad: IT Industry In Hyderabad

IT Industry In Hyderabad 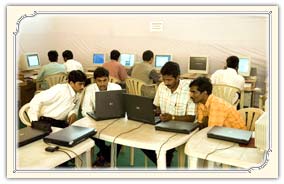 Hyderabad was conferred the title the 'software training capital of India-and rightly so. The role played by the city of Hyderabad to train the number of software professionals, who get sent to different parts of the country and around the world, have enabled the boom in the software industry in India that we see today. Since 1990, Hyderabad has seen an upward surge in the number of multinationals and tertiary sector services, making the city a tough one to beat, in terms of IT advancement. Many domestic firms and multinational companies have established their headquarters in this city and have contributed to the steady growth of the tertiary sector in Andhra Pradesh. The boom in the software industry has even led to the growth of Hyderabad's very own IT parks such as HITEC City and Mindspace Cyberabad. If you want to know more about the thriving IT industry in Hyderabad, read on.

Major IT Companies
Some of the major IT companies in Hyderabad are:
Governmental Support
The government has done much to support the development and the growth of the IT industry in Hyderabad. Many multinational companies receive invitations from the Government of Andhra Pradesh and India to come and set up their headquarters/ base for operations in the country. The government also provides support in the land allocations aspect in the event of building an IT park or establishing a single office. Many companies benefited from the building of the first IT Park in the city, HITEC City. Apart from land allocation aid, the government also helps domestic and international companies avail state-of-the-art facilities with modern offices and international styled architecture.

Hyderabad provides an encouraging environment, getting various IT companies to establish their bases, grow and network with one another across the world. One of the fastest growing economies owing to the IT sector, Hyderabad is home to some of the biggest multinational companies, BPO's and lavish IT parks.

The future of the IT industry in Hyderabad promises growth and success stories along with expansion and further technological development. It is said that Hyderabad is also known as the second Silicon Valley of India, after Bangalore. Widespread investments, digital infrastructures and training centers are aiding the growth of the number of IT parks around the city. The city has also been selected to house India's first silicon developing facility known as Fab City making Hyderabad truly India's high-tech city.