Hyderabad, also known as the city of the 'Nizams', is home to some of the most beautiful historic spots and monuments. For more information on the monuments of Hyderabad, read on.
Hyderabad: Monuments Of Hyderabad 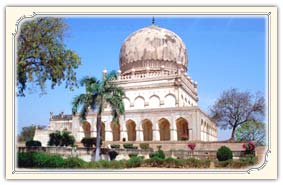 There are a great deal of monuments in Hyderabad that reflect the diverse culture and the historic background of the city. Most of the monuments are renowned for their splendid architecture and a lot of it is located in the older sections of the city. Built in the Quli Qutb Shah dynasty, these monuments are all the standing examples of its royal past. The elegant architecture of these marvelous monuments, speak volumes about the different dynasties they were built in and are an absolute delight to visit. They exude the incredible architectural knowledge and the culture of the royals. Some of the most popular monuments in Hyderabad are the Chowmahalla Palace of Hyderabad, Charminar, the Falaknuma Palace, Golconda Fort, Qutb Shahi Tombs and the Buddha of Hussain Sagar. A more recent addition to the list of monuments in Hyderabad is Ramoji Film City. Scroll down for more information on the monuments of Hyderabad.

Chowmahalla Palace
The Chowmahalla Palace was built to replicate the Shah's palaces in Iran. The sprawling courtyards and the marvelous architecture draw thousands of tourists every year. The palace complex houses the Mahtab Mahal, the Aftab Mahal, Tahniyat Mahal and the Afzal Mahal. Legend has it that the Nizams, once held lavish banquets at this palace. Today, only parts of the palace are open to public.

Charminar
A gigantic square edifice, and located in the ancient parts of Hyderabad, the Charminar is considered Hyderabad's Taj Mahal. The structure is built according to the Islamic style of architecture and was built by Mohammed Quli Qutb Shah. Each of the four grand minarets are standing examples of regal antiquity. A trip to the Charminar will not leave you disappointed. Surrounding the Charminar, are colorful glass bangle shops and stalls selling some of the most exquisite looking bangles in the country at inexpensive rates.

Falaknuma Palace
The Falaknuma Palace is regarded as one of the finest palaces in Hyderabad. Owned by the Nizams, this 32-acres sprawling palace complex is built according to Victorian-Italian architectural styles and is built in the shape of a scorpion. The complex houses the 'Gol Bangla', 'Zenana Mahal', the main entrance, kitchen, ballroom, library and a massive courtyard. Today, the Taj Group of Hotels has converted and renovated the beautiful palace into a luxury hotel, complete with the Venetian chandeliers and the intricate frescoes.

Golconda Fort
One of the strongest forts in India, the Golconda Fort is a majestic edifice with mammoth gateways. It is said that diamond merchants once sat in the courtyards of this very fort and would barter gems with other traders and buyers. Over the years, the Golconda Fort grew to become the heart of the city's mercantile activities.

Qutub Shahi Tombs
The Qutb Shahi tombs are the final resting places of the Qutb Shahi rulers. These lavishly decorated mausoleums are believed to be some of the most regal tombs in the country and perpetuate the glories of the various Shahi dynasties. Made in the Indo-Persian styles of architecture, these tombs resemble the tombs of the Shah's in Iran. The complex houses 30 raised tombs and is the only place in the whole world where an entire dynasty of rulers are laid to rest.

The Buddha Of Hussain Sagar
The Hussain Sagar Lake is believed to be a marvel in itself. However, the tourists mainly flock the lake to witness the grand, 350 ton Buddha statue that stands right in the middle of the lake. One of the tallest monolithic structures in the world, the Buddha of Hussain Sagar Lake, overlooks the entire city of Hyderabad and is a trademark structure in the city. Every day, hundreds of visitors drive past the lake or even opt for boat services to catch a glimpse of the glistening Buddha statue.

Hyderabad is home to some of the most beautiful historic monuments in the country. If you want to glimpse into the rich heritage and the regal architecture, then these monuments are a must-visit when you are in the city! Come and explore these picturesque architectural wonders in Hyderabad.