This is a one stop destination to gather all the information about Hyderabad. Get a brief picture of the city after going through this article.
Hyderabad: Information On Hyderabad 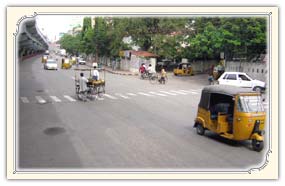 Hyderabad is known for its historic legacy and is noted mainly for its monuments, temples, bazars, masjids, amusement parks, cuisine, gardens etc. The culture of Hyderabad is an amalgamation of mannerisms of the settlers who have come here from across the country. Thus, this brings about diversities in language, lifestyle and tradition. This is also clearly shown in the festivals celebrated across the city. The four major religions which are followed in Hyderabad are-Islam, Hinduism, Christianity and Buddhism. They usually follow a culture that is a unique blend of Hinduism and Islam and the monuments, along with the places of worship, display this amalgamation, artistically. The buildings of Hyderabad display a distinct Indo-Islamic style in its architecture which is mainly due to the regional and religious influences.

Hyderabad is situated in the north western part of Andhra Pradesh and is a center point to travel to any city to the north or the south of India. Likewise, the dance and music forms of the city, display a unique culture of its own which serves as a window to the history of regal Hyderabad, to the rest of the world. The city of Hyderabad is rooted in culture and tradition which is clearly shown through the dance and the music forms since the ancient times. It goes without saying, the importance of Carnatic music to the state. The three main gurus of Classical Carnatic music belong to Andhra Pradesh. They are Saint Tyagaraja, Muthuswamy Dikshitar, and Shyama Shastri. Kuchipudi is the official dance form of Hyderabad, which is a blend of poetry, dance and acting, accompanied by Classical Carnatic music.

Culture of Hyderabad
Hyderabad, also known as the 'City of Nawabs' is steeped in rich culture and history. The city is known for its opulent heritage, with a wide array of mosques, churches, temples, monuments, historic places, food and the arts. The city of Hyderabad is recognized for its hospitality and is the one place where you can find a perfect amalgam

Festivals in Hyderabad
Every year, Hyderabad comes alive with a wide spectrum of festivals that people from different communities celebrate together. Whether they are just cultural programs with 'ghazal' nights or religious festivals such as Muharram or Diwali, Hyderabad, being a melting pot of ethnicities, goes all out during the celebrations of different festivals.

History of Hyderabad
Hyderabad, with its antiquated temples, churches, masjids and monuments is known for its rich and colorful historical background. For centuries, the city and the surrounding region have witnessed the amalgamation of a vast multitude of cultures and races, all of which have left an indelible impression upon this historic city. After the Indian independence,

Location of Hyderabad
Hyderabad, the capital of the southern state Andhra Pradesh is located on the banks of Musi River in Deccan plateau. The city which houses a population of 6.8 million has 7.75 million residents which make the city, the fourth populous in the country. Having built on the banks of Musi River, the princely state was founded by Muhammad Quli Qutb Shah in 1591 and is renowned for its delicious food, rich history and its multi-lingual culture.