Sanjeevaiah Park is a public green space where people come to enjoy and unwind. Read on to know more about the activities and amenities of this park.
Hyderabad: Parks and Gardens: Sanjeevaiah Park Hyderabad 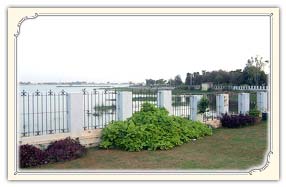 Since Sanjeevaiah Park is located in the heart of Hyderabad, it is easily accessible to all visitors coming from different parts of the city. The park covers an area of 92 acres and is situated along the banks of Hussain Sagar Lake. The name of the park was derived after the name of the former President of India, Dr. Neelam Sanjeeva Reddy. The park is currently managed and maintained by the Hyderabad Metropolitan Development Authority. It also bagged the Best Open Landscape Award at a prestigious award ceremony held during 2010, in the Indian National Trust for Art and Cultural Heritage category. The beautiful sight of the lake mesmerizes its visitors. You may even chance upon black and white striped moorhens here. Sanjeevaiah Park is considered to be the oldest and the largest park in Hyderabad. It is the perfect place for visitors to relax on the lawn and also enjoy a great family picnic. A separate walk way has been paved for visitors to enjoy strolls or jogs at the park. Scroll further for more information about Sanjeevaiah Park in Hyderabad.

Development Of The Park
Initially, there was a proposal by the Buddha Purnima Project Authority (BPPA) to build a recreational zone and to beautify the area surrounding the Hussain Sagar Lake. This was accepted as a progressive initiative by the Hyderabad Urban Development Authority in 2004. Under the proposal, there was a plan to set up a 2.4 km long aerial tramway to connect this park to the Lumbini Park, which lies on the other side of the Hussain Sagar Lake. Unfortunately, this plan by the BPPA was not approved. Later, in 2010, a new proposal was brought into consideration by the Hyderabad Metropolitan Development Authority (HMDA), which aimed at the development of the existing park. Hence, keeping a check on the environmental aspects of the park, a proposal was sent which stated that any construction of concrete structures would be avoided to protect the wildlife. Earlier, a budget of 13 crores was planned for the previous plan but only a part of it was utilized for the second plan. Solar lighting was installed by the park authorities and also HMDA made sculptures from recycled materials which were undertaken as per the Hyderabad Eco Art Project initiative. Along with this came the restriction of littering of plastics materials in the premises of the park. Measures were also taken to educate people about the harm of the degradation of the plastics.

Fauna
At the Sanjeevaiah Park, there are about 100 species of resident as well as non-resident birds with about 50 species of insects and butterflies present. There are several migratory species of birds here that visit the park mainly during the winter season. The Pied Crested Cuckoo, a harbinger of monsoon rains, is the commonly spotted bird at this park. After the construction works began at the park in 2010, some of the typical birds which visited the park such as common coot, spot bills, cranes, purple herons, cormorants and jacanas were not visible.

Activities At The Park
Several events are held for the public and tourists occasionally. Public initiatives are encouraged with hosting of events that range from roller-skating races to numerous social awareness campaigns. The park is also nicknamed as Lover's Park by the locals as couples often come to the park to spend quality time together. The charming Sanjeevaiah Park, with its sprawling lush greenery, has ample space for children to play around and for the adults to sit back and relax. There is also a children's park that will keep your little ones entertained while you soak in the beauty of this mesmerizing place.

Have a great time amidst the sprawling greenery of the Sanjeevaiah Park in Hyderabad. Whether you are planning to play Frisbee with your loved ones or you have just come to admire the park's sprawling region, you will not be disappointed!