Given below is information on the most popular tourist spot in the city. Read on to know more about the Public Gardens in Hyderabad.
Hyderabad: Parks and Gardens: Public Gardens Hyderabad 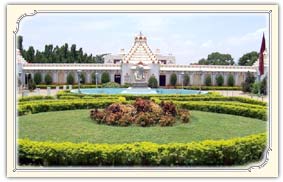 Public gardens, one of the finest gardens in Hyderabad, are one of the prominent tourist attractions with its elegant buildings and beautiful gardens. With the toy train facility which takes the visitors all around the beautiful garden, the garden draws plenty of tourists every year. A prominent landmark, it houses the State Legislative Assembly, Andhra Pradesh Art Museum, State Archaeological Museum Horticulture Department, Indira Gandhi Auditorium, Jawahar Bal Bhavan, Jubilee Hall and so on. Earlier known as Bagh-e-Aam or Peoples Park, public gardens is also one of the most frequented spots by walkers and joggers. The park's origins can be dated back to the reign of the Nizams. The public garden also houses a statue of Mahatma Gandhi which adds to the elegance of this tourist spot. With these buildings and museums, the garden offers something for everyone as it is a traveller's delight. Read further to know more about the public gardens and its surprises which are sure to mesmerise you.

Houses Public Buildings
One of the oldest, biggest and finest gardens in Hyderabad, the Pubic Garden dates back to 1846, during the reign of the Nizams. Situated in Nampally, Hyderabad, the major highlight of the gardens is that it incorporates plenty of prominent buildings in its premises. It is one of the most frequently visited gardens in the city and is famous for beautiful landscapes, lawns, pathways and some prestigious institutions. Earlier known as Bagh-e-Aam or Peoples Park, it is still used as a recreation park and is frequented by walkers and joggers. Recently, a huge statue of Mahatma Gandhi, in a praying posture has been added to the premise which enhances the beauty of the garden. Some of the important public buildings the Public Garden houses include State Legislative Assembly, Andhra Pradesh Art Museum, State Archaeological Museum Horticulture Department, Indira Gandhi Auditorium, Jawahar Bal Bhavan, Jubilee Hall Telugu Lalita Kala Thoranam and Health Museum and an ancient mosque.

Attractions
The State legislative assembly building inside the public gardens was inaugurated in 1985 by the then Prime Minister of India, Late Rajiv Gandhi. Andhra Pradesh State Archaeological Museum has a huge collection of stone and metal sculptures from the Satavahanas to the Ikshvaku period, unique antiques, art objects, rare artefacts, ancient inscriptions, old age coins, armoury, and traditional crafts including Bidri articles, old Chanaware and textiles. In addition to that, the museum also has an Egyptian mummy which was presented to the Seventh Nizams by the son-in-law of the sixth Nizam (Mehboob Ali Khan).

Constructed in 1920 in the Indo-Saracenic style by Nizam VII, it is a building which is worth visiting. The museum also has Buddhist and Jain relics and coins which date back to the Satavahanas period. The ancient mosque in the premises of Public Gardens, Shahi Masjid symbolises the Shahi architecture which you can see in its arches, minarets, domes and columns. Apart from the major public buildings, the public gardens also houses Telugu Lalita Kala Thoranam and Health Museum. Telugu Lalita Kala Thoranam is an open air theatre which has been the venue for many film festivals, fashion shows and beauty pageants.

School Picnic spot
A prominent spot for school picnics, the Public Gardens also houses an auditorium like Indira Gandhi Auditorium, and Jawahar Bal Bhavan, which is a mini school where children attend classes in fine arts. Children find this place exciting as there is a toy train which takes the visitors around the garden. It also offers boating facilities on its small lakes and a small zoo, where you might be able to spot an elephant tied at the entrance. In addition to this, the garden hosts many cultural events every year.

Public gardens is a must visit destination for the tourists to Hyderabad. Come and explore the beauty and the magic of these gardens!