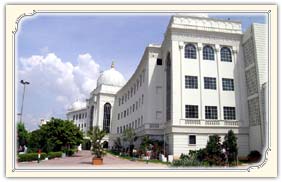 Salar Jung Museum is one of the three National Museums of India. This museum is the also the third largest museum in India and it houses a collection of ancient manuscripts, ceramics, metallic artifacts, carpets, sculptures, textiles, paintings and clocks. Most of the articles treasured in this museum, belong to different civilizations. Daggers belonging to Empress Noor Jahan, Emperor Jehangir and Emperor Shah Jahan are among the important historical antiques found in the museum. The ancient artifacts held in the museum belong to the Salar Jung family and these collections dates back to the 1st century. Under the Salar Jung Museum Act of 1961, the museum is maintained by the Board of Trustees with the Governor of Andhra Pradesh as ex-officio chairperson. Apart from the thirty eight galleries containing precious artifacts, the museum also has a library, cafeteria, sales counter and a reading room. The Salar Jung Museum is one of the best tourist attractions in Hyderabad and it attracts about ten lakh visitors every year.

Museum Collections
Salar Jung Museum encompasses the Nawab's prized ancestral collections, which are displayed beautifully in this museum. Some of the many historical artifacts include the paintings of the famous Raja Ravi Varma, Tipu Sultan's wardrobe, daggers crafted with gems that belonged to ancient kings and queens, Aurangzeb's sword and jewel encrusted boxes. The museum also comprises of ancient furniture collection that belongs to the 14th and 17th centuries. Some of the other important historical articles include wood cut paintings, the statue of 'Veiled Rebecca', Mughal miniatures, European sculptures, Chinese porcelain, embroidery works, metal-ware, jade carvings, Japanese silk paintings and elegant ivory works as well. One can also admire the 'Mestophiles' and the 'Lady with the Lamp', which are some of the highlights of the museum. The '19th Century British Musical Clock' is the most prized artifact among the other three hundred clocks within the museum.

Infrastructure
Salar Jung Museum contains thirty eight galleries, which are spread on two floors. There are twenty galleries on the ground floor and eighteen galleries on the first floor. Each gallery in the museum exhibits artifacts that are under separate subjects. The museum also has an education section, a laboratory for chemical conservation, a reading room, library, cafeteria and a sales counter.

Salar Jung Museum is one of the most highly visited places in Hyderabad. This museum houses many historical articles collected by Nawab Mir Yousuf Ali Khan Salar Jung III during his lifetime. Some of the oldest artifacts treasured in the museum dates back to the 1st century, and one can find many antiques that belong to Middle East, Europe and Asia as well. Visit this museum with your friends and family and admire a world of ancient civilization.