Golconda fort in Hyderabad is an architectural splendor, which should not be missed. Read further to know more about its attractions.
Hyderabad: Tourist Attractions in Hyderabad: Golconda Fort 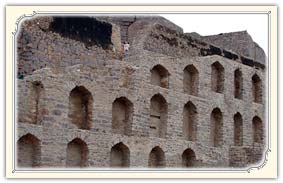 The Golconda Fort is one of the most delightful monuments and is located 11 kms west of the city. The grand structure which was constructed by the Kakatiya rulers of Warangal in the early twentieth century was originally just a mud fort. It was later converted into a grand structure with ramparts and granite walls by the Qutub Shahi kings. It was seized by one dynasty to another and finally took form in the hands of the Qutub Shahi rulers. Reconstructed as a defense structure, the Golconda Fort was reinforced by walls, bastions and battlements. The outdoor carvings and the stone works of lions, peacocks and griffins, exemplify the influence of the Kakatiya Dynasty. With an eleven kilometer perimeter, 15 to 18 foot high walls and about 70 ramparts and 8 huge gates, the fort appears nothing short of amazing. Read further to know more about Golconda fort and its main attractions.

History
The name 'Golconda' originated from the Telegu words 'Golla' and 'konda', which means "shepherd's hill". The 10 km radius from Golconda to outer Hyderabad was once a market city known for its trade of diamonds. The diamond, Darya-e Nur, meaning 'sea of light', measuring 185 carats and now in Iran, was mined here. Other renowned diamonds namely Kohinoor diamond, Hope diamond and Regent diamond are believed to have also been mined here. The fort was built in 1143 AD by the Kakatiya rulers and was later seized by the Bahamani kingdom in 1364 AD. This was later fortified by Quli Qutub Shahi in 1507 AD as a structure for defense, which led to the fort acquiring an important role in the political map of India. \

Major Attractions
What makes the fort stand out is its system of acoustics. The sounds of the claps made at the entrance of the fort can be clearly heard at the top of the hill. You can also see two pavilions outside the fort built on rock namely, Taramathi Gana Mandir and the Premamathi Nritya Mandir, where the legendary sisters, Taramathi and Premamathi resided. It is said that the two sisters performed on a circular shaped dais at the top of the structure, Kala Mandir. This could be visible from the king's court from the top of the fort. The other highlight is a light and sound show which draws plenty of people. The legendary Bollywood actor, Amitabh Bachchan lent his voice for the shows held here. The show which includes audio and visual effects can be watched in English, Hindi and Telegu languages.

Architecture
Golconda fort is famous for its numerous halls, royal apartments, parade grounds and mosques. The fort has eight gates with the main gate being Fateh Darwaza which marked the victorious march of King Aurangzeb. The door is of 13 ft. width and 25 ft. length and was built with steel spikes to protect it from elephants. The Balahisar Darwaza is yet another magnificent structure. Its architecture is also the embodiment of Nawabi culture and style. The eastern gateway is the biggest gate and the only entrance open to visitors now. Constructed on a hill, this intelligently planned architectural splendor has excellent ventilation which used to be a huge respite during the summers for the royals. It is believed that is an underground tunnel which starts from Durbar Hall in the fort to the foothills.

Golconda Fort is a must visit for any tourist visiting Hyderabad. Hope this article brings into the light its attractions and architecture.