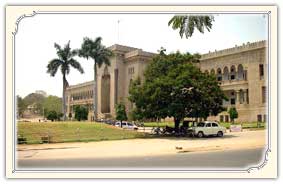 The origin of Osmania University, a public state university located in Hyderabad, can be dated back to 1908 when it was established by the last Nizam of Hyderabad, Mir Osman Ali Khan. One of the oldest universities in India, it is one of the first universities where Urdu was the medium of instruction. The university has almost 300,000 students studying in its campuses and affiliated colleges. Exclusively known for the faculty of Engineering and Technology, Law, Arts, Sciences, Management and commerce departments, Osmania Medical College, which was once part of the university, is now supervised by the NTR University of Health Sciences. In 2012, the university was at the sixth position in humanities, science and commerce among the prominent universities in the country and even bagged a 'University with Potential for Excellence' status. The reputation of the university was on a rise when the government of India released a university postal stamp on 15 March 1969. Read on to know more about Osmania University.

History
The Osmania University was established in 1908 by the seventh Nizam of Hyderabad, Nawab Mir Osman Ali Khan with a purpose of enhancing the higher education system in India. The university is the third oldest institute in southern India and the first to be established by the princely state of Hyderabad. Since then, it has sustained the development of all faculties and the contribution to the academic, social, and economic development of the region is immense. The University has a library which boasts of one of the biggest ones in the state. The University boasts of alumni who have distinguished faculty such as P V Narasimha Rao, Shri Y. Venugopal Reddy (Governor, RBI), Barrister and Member of Parliament Asaduddin Owaisi and so on.

Significance
This non-profit University which is managed and funded by the Government extends to over 1600 acres and boasts of one of the biggest education systems in the country. It has over 300,000 students pursuing their higher studies and 3,698 international students for more than 80 countries with more than 5000 staff members. The main campus of the University is ranked Tenth

among other state universities. The Department of Geography and Geoinformatics is one of the best in India. Equipped with the best laboratories and technology, it provides updated technical know-how to the students.

Osmania University is one of the best Universities in the state. Hope this article familiarizes you with the university and its contributions to the state.