Mecca Masjid is a famous mosque situated in Hyderabad. Read this article to know more about Mecca Masjid, the things to do, nearby places and details on how to reach the mosque.
Hyderabad: Places of Worship at Hyderabad: Mecca Masjid Hyderabad 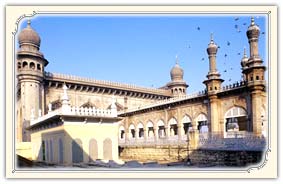 Mecca Masjid is the biggest and the most spectacular mosque of Hyderabad. It is also one of the largest mosques in India and is listed as a heritage building. It is believed that a strand of Prophet Mohammed's hair is preserved in a room in the mosque's courtyard. The bricks used for the construction of the mosque were brought all the way from the holy city of Mecca, Saudi Arabia. For this reason, this gorgeous mosque was named after the Grand Mosque in Mecca. This ancient mosque of Hyderabad has a large hall that can accommodate over 10,000 worshippers at the same time. One is bound to be awe-struck by the beautifully patterned walls of the mosque, which are made of granite. What's more, the verses of the holy 'Quran' are inscribed on the arches of Mecca Masjid, which makes this mosque look divine. If you are in Hyderabad, make sure this monument is on your must-see list!

History
According to history, Sultan Mohammed Qutub Shah began the construction of Mecca Masjid in Hyderabad under the guidance of Choudhary Rangaiah and Daroga Mir Faizullah. The construction was completed by Mughal Emperor Aurangzeb in 1694 after 77 years.

Architecture
Mecca Masjid is built in granite and the bricks for construction were brought from Mecca, the holy city in Saudi Arabia. About 8000 laborers were required to build this great monument. There is a gateway erected just before the path leading to the entrance of the court. One can see a huge pond of water and two stone benches that are mounted near the entrance as well. Legend states that if a person sits on these benches, he/she will return to sit on these benches again. The mosque has a prayer hall, which are 75 feet high, 180 feet long and has a width of 220 feet"perfect measurements to accommodate over 10,000 people.

There are 15 intricately designed arches that support the roof of the main hall, in which 5 arches were constructed on 3 walls. The mosque is decked with Belgian crystal chandeliers, which adds to the beauty of the exquisitely designed interiors of the mosque. Inside the mosque, there are 5 passageways and tombs of the rulers belonging to the 'Asaf Jahi' dynasty. Ancient and rare artifacts and relics are treasured in a room located in the courtyard.

Things To Do
Nearby Places
One can also visit the beautiful Charminar, which is another historical monument in Hyderabad located only 100 meters from the Mecca Masjid. Chowmahalla Palace is also situated nearby, which belonged to the Nizams of Hyderabad. Laad Bazaar or 'Choodi' (Bangles) Bazaar is a popular market where you can buy different types of bangles.

Mecca Masjid is situated very close to Charminar Bus Stand. One can board a bus from anywhere in the city and get off at this bus stand. From here you can either walk or hire a taxi or an auto-rickshaw to get to the mosque.

By Rail
The Kachiguda Station is the nearest railway station to Mecca Masjid and is well-connected to almost all other local stations in the city as well as in the country. Once you disembark at the station closest to the mosque, you could opt for local transport (taxi/auto-rickshaw) to get to the monument.

Located about 100 meters from Charminar, Mecca Masjid is one of the most magnificent structures of Hyderabad. The mosque is one of the well-known tourist attractions in this city. One will be amazed to see the elegant designs carved on the arches and the Quran's Verses etched on the walls of the mosque. Mecca Masjid is known for its architectural splendor and is truly a work of art.