HITEC city is a technology township, which is also Hyderabad's IT hub. Read on to know more about its attractions.
Hyderabad: Tourist Attractions in Hyderabad: HITEC City Hyderabad 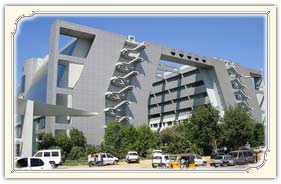 HITEC city, known as Hyderabad Information Technology Engineering Consultancy City, is a prominent technology township which is located at the center of the information technology industry in Hyderabad. The township is spread over 151 acres in the suburbs of Madhapur, Gachibowli, Kondapur, Manikonda, Thellapur, Nanakramguda and Sharthpur. The township, which is located towards the north western direction of the city, was given the name HITEC City for the park's IT progression and software development. Built as a result of the IT revolution in India, HITEC City transformed the way in which the princely state of Hyderabad is perceived. It made the city a competitor to Chennai and Bangalore in wearing the crown of the IT hub of India. The first phase was inaugurated in 1998 and is well connected to the city through rail and buses. The park also houses the offices of the IT giants of India as well as the world. Read further to know more about HITEC City and the wonders that it has in store.

The IT Hub
Hi-tech city in Hyderabad is the result of the IT revolution which India witnessed. With the development of Bangalore as a prominent IT hub, the Andhra Pradesh government realized the importance of the need for better infrastructure so that the government can attract investments from varied companies. As a result, the government decided to start a project, thus, inviting private investments. The commencement of the project was done initially by L&T ECC and was named L&T INFOCITY. Vijayawada IT Zone is the first of the kind of IT/ITES SEZ project in Coastal areas of Andhra. The main aim was to have an integrated township for IT professionals to work and live. The first phase of HITEC City, Cyber Towers, was inaugurated in November 1998. The second phase, Cyber Gateway, is known for a huge arch in front of the building which also serves as a gateway to the rest of the city.

Infrastructure
The construction of HITEC City is one of the biggest technological revolutions of Hyderabad. In the middle of this park stands a ten storeyed cylindrical shaped building which houses the offices of IT giants such as Microsoft, IBM, Toshiba, Wipro, Oracle and so on. The tech park, which covers almost five lakh square feet, also has an earth station, which provides fast communication links to five continents of the world. It is an integrated township with l modern infrastructure and amenities including housing colonies, shopping complexes, auditoriums, showrooms, heath clubs, cafeterias, banks and so on. A companion building known as Cyber Gateway is nearing completion in 8.5 lakh square feet of build-up space. The main characteristics of the city are its wide roads, land, dust free atmosphere, medical facilities and power back up.

Other Attractions
The Indian Business School which is located in the vicinity of Tech Park is a dream destination for most business professionals and graduates. The school has facilities such as amphitheatres, library, conference rooms, restaurants, coffee shops besides the technologically laced classrooms. The International School of Information Technology is another highlight which makes HITEC City stand out.

This sprawling IT and residential park has revolutionized city of Hyderabad. Hope this article familiarizes you of its wonders.