Charminar, popularly known as The 'Arc de Triomphe' of the East, is one of the most prominent monuments in Hyderabad. Read on to know more.
Hyderabad: Tourist Attractions in Hyderabad: Charminar 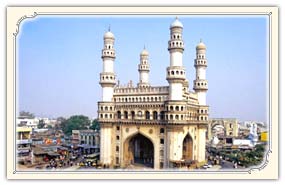 Charminar, in Hyderabad, which attracts a large number of tourists every year, was constructed in 1591 by Mohammed Quli Qutub Shah to mark an end to the plague in the city. This grand structure, which is known as the "The Arc de Triomphe of the East", derived its name from the four minarets. This magnificent legendary monument of the Qutub Shahs looks even more stunning in the evening lights. The structure has gained great importance as it is the centre of all the bustling activities in Hyderabad now. Located in the midst of Laad bazaar, which is a shopping hub famous for glittering bangles, Charminar is always flocked by tourists. The city is often identified with this majestic structure which exudes 400 years of imposing charm. The Charminar, which is a perfect epitome of Indo-Saracenic tradition, is a monument which is not to be missed. Read further to know more about Charminar and the surprises that it has in store.

The 'Arc De Triomphe' Of The East

History
One of the most charming landmarks of Hyderabad, the Charminar is the finest example of Qutub Shahi architecture. The age of this grand structure can be dated back to Quli Qutub Shah, who constructed this magnificent edifice, in 1591. This 400 year old charming structure is known as 'The Arc de triomphe of the East'. It is said that the inadequacy of water and plague forced Quli Qutub Shah to construct a new city with Charminar at its centre and four roads built around it in four different directions.

Architecture
The Charminar is a two storied building with the first floor being covered. The grand structure received its name from the four minarets which stands in the four corners of the building. They rise to almost 48.7 meters from the ground and overlook the landscape of the area. Charminar is square shaped and the minarets have four levels with level circled by a ring around the minaret. The four arches of the building face four main directions and each side is opened to a huge courtyard. The arches have a width of 11 meters and a height of 20 meters from the base.

The balcony in the first floor provides an excellent view of the surrounding areas and on the top floor, there is a small mosque which is on the Western side of the monument, which faces Mecca. This mosque is the oldest surviving mosque in the city. In the Charminar, there are forty five prayer spaces with a huge space in the front to accommodate more people for Friday prayers. There is a verandah at the eastern portion of this space with a huge open arch.

Though it is the perfect epitome of Shahi architecture, there are clear elements of Hindu architecture visible on this monument. In the arches and domes, Islamic architecture is explicit and the ornamentation is primarily Hindu style. Constructed using granite and lime-mortar, the floral designs and water screens enhance the monument's beauty and elegance. It also offers excellent view of the Golconda Fort which reiterates the glorious times of Hyderabad when it was under the reign of Qutub Shahi and the Golconda rulers.

The city of Hyderabad is known for the grand structure of Charminar. Hope this article acquaints you with the great monument and its wonders.